My Ticket to Heaven 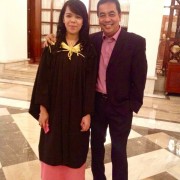 Sarah Ballao, a student leader from Victory Makati, recounts how God removed mindsets in her that kept her from growing in her relationship with Him.

I was a Christian since birth. My parents brought me up in the ways of the Lord, and I had perfect Sunday school attendance. My father served in the church I grew up in. This being said, people would always expect so much from me. They expected me to do the right thing, even without being told to do so. Truth be told, I wasn’t the “good girl” that people thought me to be.

I knew a lot of things, but they never translated to how I lived my life. I was blinded by the idea that God’s grace was a license to sin. I believed that since He had already forgiven me from my past, present, and future sins, it was okay to sin again and again. Because, what did I have to lose if I already had a ticket to heaven? My dad served in church anyway.

My parents trusted me a lot because I was a “good girl”, after all. When I was in college, I began hanging out with friends he never knew about. I abused my dad’s kindness and was always out drinking with these friends. One day, I got found out—and the people around me began condemning me because of what I did.

I was so ashamed of my mistake that I didn’t even want to go to church anymore. I was beginning to lose hope. Then God showed up in the most unexpected way.

The school org I was part of held an event in school, and Pastor Job of Victory Makati was slated to speak there. Honestly, I wasn’t even listening to him talk—I showed up only because my friends were there. After his message, we were all split into groups, and that’s where I met Jaycee. After going through the group discussion, she explained what Every Nation Campus was all about, and invited us to youth service.

That Friday, I attended the youth service, but I felt so out of place—not because of the people around me, but because I felt so ashamed of myself. I thought that they were “holy people”, and I felt like I shouldn’t even be there. I decided not to go back after that, but Jaycee kept on sending me text messages asking how I was. I felt obliged to reply to her because I didn’t want to offend her. We eventually did ONE 2 ONE together, and I slowly began to understand what Jesus did for me. My dad’s service in the church was not my ticket to heaven—it was Jesus dying on the cross for me which made a way for me to be reunited with God.

I still struggled with condemnation because of my past sins, but layer upon layer of my shame was removed when I had an understanding of who I was—and am—in Christ. His Word says that I am chosen, royal, and holy. All of the pain and condemnation that lingered in me was removed. I became secure and I gained back my confidence.

Today, I stand firm with my belief that I am a new creation. My mind has been renewed, and my mindset that my salvation is through my dad’s good works is now gone. I also started to build relationships with the right people—men and women who encourage me to walk in God’s ways and spur me on to God’s will and destiny for my life.

I am now boldly preaching to people how God transformed me and how faithful He is to me, my family, my studies, and my needs. Jesus died not only for Christians—He wants all people to know about Him, and for them to be saved. If someone took the time to get to know me, listen to me, and preach the gospel to me, why would I not do the same?

Truly, it is never too late for any one of us to turn back to God. God is gracious and faithful, and He will change your life.