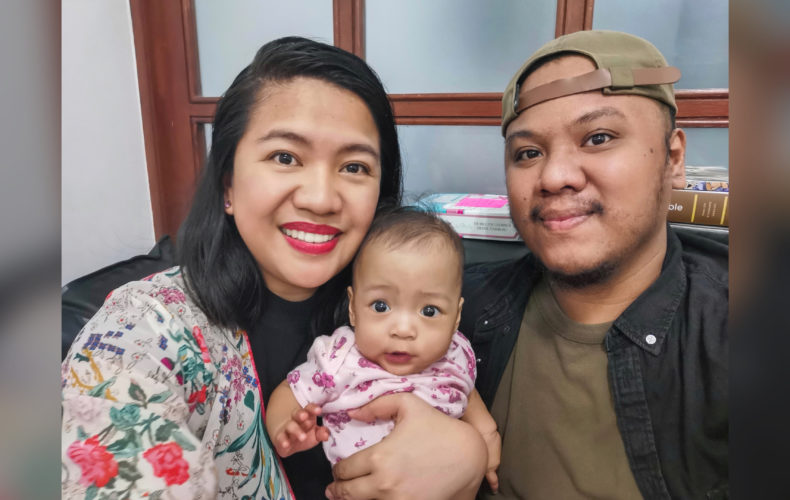 Sometimes, God heals in ways we don’t expect. As we prepare for the midyear fast, let us be encouraged and inspired by this amazing testimony of God’s healing, faithfulness, and grace.

My husband and I got married in 2017. I got pregnant a year later but had an early miscarriage. We prayed for a baby, and in 2019, I learned that I was pregnant again. We were so happy, and everything was going well with my pregnancy—until I reached my sixth month. As I entered my third trimester, I developed pregnancy-induced hypertension that eventually led to preeclampsia, a pregnancy complication characterized by high blood pressure.

According to my doctor, my condition could cause serious health problems to me and my baby, and it could be fatal. I was immediately admitted to the hospital during our 2019 midyear prayer and fasting for an emergency delivery via C-section. My baby was only 29 weeks old at that time.

I stayed in the hospital for a week, while my daughter, Quinn, stayed in the neonatal intensive care unit (NICU) for four months. Though I visited her every day, each moment that she was there broke my heart. Seeing her grow but experience different complications brought me through a roller-coaster ride of emotions.

While in the NICU, Quinn developed mild pneumonia and had a bacterial infection. She also had anemia, which meant that she needed a total of seven blood transfusions throughout her hospitalization. Though she managed to overcome those, she later developed an inguinal hernia, which left an internal opening on both sides of her groin. According to her doctor, this type of hernia does not close spontaneously. She needed to undergo surgery once her weight reached 2.5 kilograms to prevent her internal organs from being dislodged.

Though difficult, it was a blessing that we received so much encouragement from Quinn’s doctor despite her condition. I remained hopeful amid everything that was happening and eventually built relationships with the other moms and doctors in that unit. We would pray together each day and be reminded of how mindful God is to us. Even in the area of finances, God also miraculously provided for us. He used our families and the people in our church community to help us with our running bill, which we had to pay on a weekly basis.

When Quinn was finally discharged from the hospital in November 2019, we sought God for wisdom. After seeking Him in prayer for weeks, we made a decision to let her go through the operation once she reached the required weight. It was one of our faith goals in the 2020 January prayer and fasting. We prayed for provision and a successful operation—but we also never stopped believing God for miraculous healing.

On the third day of our prayer and fasting week, something unexplainable happened. I found comfort and reassurance from God that He would heal Quinn. I was so overwhelmed at that moment; I cried and trusted God as I believed for my daughter’s healing. And though it didn’t happen right away, I didn’t doubt God and continued to hope and believe in what He impressed in my heart.

Months passed by, and Quinn slowly gained weight. When her weight exceeded 2.5 kilograms, we knew that it was time for her to go through surgery, but something in me was telling me otherwise. I knew that God could use the operation to heal her completely, but a part of me was also in faith that she didn’t need to go through it anymore.

In the weeks that followed, it seemed as if the lumps that used to be in her groin were no longer there. In March, we were planning to have her checked, but the enhanced community quarantine was implemented, so there was nothing we could do but wait. While waiting, I struggled to fight the lies in my head as I continued to hold on to God’s promise. I constantly reminded myself of His amazing grace through the lyrics of the song that I always sang to Quinn in the NICU:

The Lord has promised good to me. His word my hope secures.
He will my shield and portion be, as long as life endures.

Finally, on June 13, 2020, we went to the doctor for Quinn’s checkup and immunization. The lumps that served as physical manifestations of the openings in her groin were completely gone! Even the doctor was surprised when she confirmed that Quinn no longer needed surgery. She had been healed—completely!

What happened to Quinn was a miracle that we knew we had to share. It was something that seemed impossible, but God proved Himself faithful. Her name, Quinn Gabrielle, which means “wisdom” and “God is our strength,” holds true. God has given us wisdom to wait and the strength to endure everything we have gone through. It was His amazing grace that was with us all throughout. And it will continue to be with us as we believe God for His beautiful plans to unfold, for Quinn and our entire family.

God is able to answer our prayers beyond what we ask or think. As we prepare for the midyear fast on July 7–9, let us all hold fast to His grace and be expectant.

Chams Pagulayan-Malana is one of our campus missionaries in Victory Malate. She and her husband continue to rely on God’s amazing grace as they raise their beautiful daughter, Quinn.