“I would drink alcohol for breakfast,” confesses 35-year-old Manuel Gan. “I started drinking at thirteen years old; I would drink everyday, even if I was alone.”

Growing up, Manuel had to adjust to the harsh reality of living in a broken family. When he was around seven years old, his parents separated. He and his sister were forced to live with their father in Nueva Ecija, while their mother remained in Manila. Being the older child, Manuel took the separation to heart, and the burden he felt to repair their fragmented family soon took its toll.

He dropped out of high school one day, and never returned. Without direction, his life soon revolved around addictions and fleeting pleasures. “I got angry at God,” he shares, “I felt that he let me down when he allowed me to grow up in a broken family.” His deep-seated anger led to depression, which then led to total rebellion. This further damaged his relationship with his father. In an attempt to assert control over his defiant son, his father would beat Manuel when they would get into disagreements—which happened often.

Manuel would drink everyday, hang out with his buddies, and play computer games; this became his routine. He eventually went to Manila, hoping that his mother would take him in and allow him to live with him. To his dismay, his mother turned him away, but promised to continue giving him money to provide for his needs. She couldn’t take him in anymore; she has already started her own family with another man. 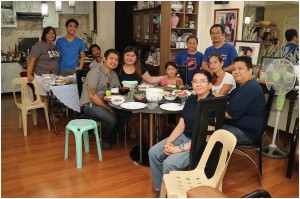 Feeling rejected and abandoned, Manuel spiraled further into depression. At the age of 14, he had to be checked into a rehabilitation center to address his alcohol addiction. “I stopped drinking for a while,” Manuel says, “But after some time, I fell back to my old habits.”

He left Nueva Ecija and started living on his own in Manila. This reconnected him with his mother, who has started attending Victory. Still unable to find a job, Manuel continued receiving money from his mother, who has long given up trying to reform him. “I was full of anger. Whenever she tried to interfere with my life, I would just get mad at her, and then we’d fight,” he explains. This went on until Manuel turned 30 years old. He realized he let his life pass by wallowing in self-pity, anger, and alcohol.

One of his arrangements with his mother was to drive her around. One Sunday, she asked him to drive her to Victory Fort. When he was invited to attend the worship service, Manuel surprisingly obliged but he had reservations. “I was compelled to attend because nothing was happening in my life,” he shares, “But at the same time I was judging my mother for being a Christian because I still saw her faults.”

Soon, Manuel found himself attending Victory worship services regularly with his mother, who has already received Christ in her life. He was eventually connected to Alex Monis, who became his One 2 One mentor and Victory group leader. “I didn’t finish school, I don’t have any job to speak of, and I was an alcoholic for almost two decades but Kuya Alex didn’t make me feel inferior,” he shares. This year, Manuel finished One 2 One, and underwent Victory Weekend last May.

During Victory Weekend, he released himself from the bondage of alcoholism, low self-esteem and entitlement. For the first time in his life, Manuel felt unburdened and accepted without judgment. “I gave everything to Jesus,” he says, “I told Him that He is in charge of my life from now on.” His attitude towards life radically changed. Manuel realized he has a purpose, and that is to glorify God in his life. “There’s a reason He has still allowed me to live for this long after all the damage I’ve done to my body,” he says.

Slowly, his relationships with his family improved, emotional wounds were healed and Manuel learned the importance of forgiveness. He also developed a desire to preach the gospel to other people. Today, Manuel is studying more about discipleship and leadership at a ministry school in Parañaque. He is in faith that he will be able to reconnect with his old friends and share his testimony with them.

From someone who was so mired in hopelessness and anger, Manuel now desires to reach out to more people and tell them how God has changed his life around and given him purpose again