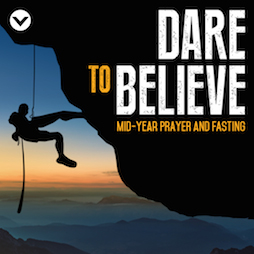 Daring to Believe for Miracles

“I said yes, even if I had no idea what I’m supposed to do.”

These were the words of Troy Alvarez, a 17-year old student at Lyceum of Alabang, who joined our Dare to Believe prayer and fasting week last January 2016. On the first day of fasting, he felt God speak to him to pray for someone in church. It was the first time he heard God tell him to pray for someone. He didn’t know any special prayers, and he didn’t know how to approach strangers. Still, he said yes.

The next day in Victory Alabang during the first session of prayer and fasting, he scanned the crowd for someone he could pray for, and his eyes fell on an elderly woman. He couldn’t shake the feeling that this woman had cancer. Troy prayed for confirmation from God, and a feeling of certainty washed over him. “This is her. God wants me to pray for this woman,” he told himself.

After praise and worship, Troy started approaching the woman but before he could get near her, he was suddenly overwhelmed with fear and uncertainties. He couldn’t move a step forward and found himself retreating to his seat. Doubtful and defeated, Troy headed home instead. During his commute, there was a gnawing feeling inside him. He couldn’t take his mind off the elderly woman who needed his prayers. “I could feel there was something wrong,” he confesses, “I didn’t obey God because I was thinking more of what other people would say. I didn’t trust Him.” Feeling humbled, Troy prayed that the woman would be there tomorrow and he resolved to approach her, so he can do what God has been telling him to do.

The next day, Troy immediately looked for the woman. God answered his prayer, because he had no difficulty finding her. Gathering courage, he approached her and introduced himself. He found out that his name is Ester, and she was fighting breast cancer. At the time she met Troy, the cancer had spread to her lungs.

“I asked her if I could pray for her,” he narrates, “I told her that God has been telling me to pray specifically for her.” As Troy was praying, he suddenly felt very cold and goosebumps overwhelmed him. He felt the presence of Jesus in their midst. He shared with her his life verse from Mark 11:24, “Therefore I tell you, whatever you ask in prayer, believe that you have received it, and it will be yours.” Before long, he found himself crying with Tita Ester. “After praying for her, I was speechless and I felt really cold,” Troy shares, “I felt a mix of emotions, but the most overwhelming thing is the joy that is overflowing in me.”

The next day, Troy went to church again and the first thing he did was look for Tita Ester. To his dismay, she wasn’t in church. Troy couldn’t help but worry and feel anxious about her absence. Remembering how he felt Jesus’ presence yesterday, Troy was comforted. At home, he continued to pray and fast for Tita Ester’s healing. He knew nothing is impossible with God. He is sovereign, and He can cure any sickness in a blink of an eye.

On the last day of prayer and fasting week, Troy prayed to see Tita Ester once again. To his relief, she was in church and he ran towards her once he saw her. Tita Ester was in high spirits. She had wonderful news that she couldn’t wait to tell Troy about. Doctors were dumbfounded to discover that the cancer in her lungs seemed to have disappeared!

Upon hearing the news, Troy felt a wave of peacefulness wash over him. God did not only give him front row seats to witness a miracle, but He used him to be an instrument of blessing to someone he didn’t even know when the week began. Troy wasn’t spared from the voices in his head telling him that his faith is not enough to heal, but he clung to his life verse and was reassured that God can do the impossible. Ester’s daughter, April, agrees; her mother recently underwent laser surgery to remove a small tumor discovered in her brain.

“Though we know Mom’s fight with cancer isn’t completely over,” she shares, “we know that the victory is already ours because of Jesus. We’re so blessed because God gives her so much strength; she’s a fighter.” Ester’s courage has made quite the impression on Troy.

“This experience taught me to be brave,” Troy shares, “It showed me that when God declares something, it will happen. We’re not the miracle workers, we’re just the instruments, so we need not fear. We just have to dare to believe.”