Discipleship and the Outdoors

Making disciples knows no locational barriers because opportunities to engage are all around us – even right on a trail to a mountain’s summit.

Just ask some of the single professionals from Victory Quezon City.

In 2011, they organized various outdoor events to connect with the employees of US Technology Global (UST Global), an IT service provider.  More than sweating it out, exploring nature, and having fun together, they were able to engage these men and women and lead them to Christ. 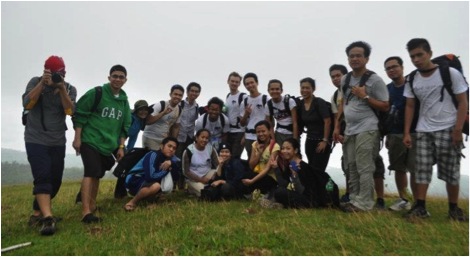 Their first initiative took place in May when this group went on a trek to Pagsanjan Falls in Cavinti, Laguna. Everyone bonded over comedic and adventurous moments during the long trek. Later, Victory Quezon City‘s Champions for Christ team led a Basic Mountaineering Course. This lasted for five to six months and was capped with a climb to Mt. Gulugod Baboy in Mabini, Batangas as the culminating activity.

Right now, a Victory group of UST Global employees meets every Friday over lunch. Some of its members got connected in Victory groups after participating in the two initiatives. The group’s leader himself, Rey Piad, was reached out through an outdoor activity. Little did he know that joining a weekly Sunday afternoon run at the University of the Philippines with runners from Victory Quezon City would be an avenue for him to have a life-changing encounter with Jesus.

Another Victory group is currently meeting at the UP Ayala TechnoHub every Thursday night. This group was formed from the Anawangin Cove escapade, which is another outdoor activity organized by Victory Quezon City.

Surely, God has effectively used the love for sports and the outdoors to bring thrill-seekers together and to lead them to having a personal walk with Him!

If you are a sports enthusiast or adventure-lover who wants to connect with people of the same passion, feel free to join any of these outdoor activities! For Victory Quezon City, connect with Champions for Christ QC on Facebook.