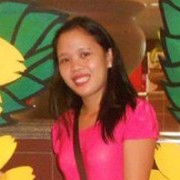 Any work done unto the Lord is worship to Him; work should not be a hindrance for us to disciple others. Maylin Duhilag, a twenty-five year-old stay-in helper, certainly agrees.

Maylin grew up in a Christian home, but she didn’t take her walk with God seriously. That changed after her employers invited her to church, where she was then invited to be part of a Victory group in Victory Metro East. She admits that she had a tough time at first.

“I was only there to listen,” she recounts, chalking it up to timidity. “I wasn’t sharing about my life.”

Eventually, Maylin’s shyness became a challenge when Joy, her Victory group leader, encouraged her to disciple people and preach the gospel to them.

“I was very shy,” she says. “It’s not like me to approach people and talk to them.” But Joy said, “‘You shouldn’t feel ashamed (of preaching the gospel) because of your work. You just have to do it.’ I realized that being timid was not part of God’s will for my life.”

Eventually, Maylin asked God for opportunities to step out in faith and disciple someone. The process wasn’t easy at first, of course. She’d send text messages to different people, inviting them to Victory group.

“They’d reply by saying ‘yes,’ and I’d get excited. I thought this was it!”, she recounts, only to not have these women show up at the set date, time, and place—or worse, cancel at the last minute. Despite these challenges, Maylin persisted.

“Joy also encouraged me to do my best—to keep on praying, and keep on inviting others. You shouldn’t wait for people to approach you, asking to be discipled. You have to go out there.”

Maylin’s persistence and boldness paid off when she met Rama, a thirty-three year-old businesswoman, after an altar call at a church service. They eventually began to meet regularly for ONE 2 ONE discipleship.

“Just like me, Rama was hesitant in sharing about her life,” Maylin says. “But I kept on praying for and encouraging her.”

Wasn’t Maylin intimidated by how different Rama was from her? For one, Rama was older, and she had a totally different line of work. “No,” Maylin says. “The people around us would not know who Jesus is, unless we tell them.”

Maylin and Rama regularly continued meeting for ONE 2 ONE. Just last June, Rama was water baptized, and now has a heart to disciple other women. In the same way, Maylin is continuing on the work God has started in her—by preaching the gospel to the women entrusted to her for discipleship.

Maylin believes that her transformation from being a shy churchgoer to a bold disciplemaker is the work of God’s power in her life. “Jesus did not hold back from obeying the Father when He died on the cross for us.”

Now, Maylin has no holding back in sharing God’s love to the people around her—no matter what.