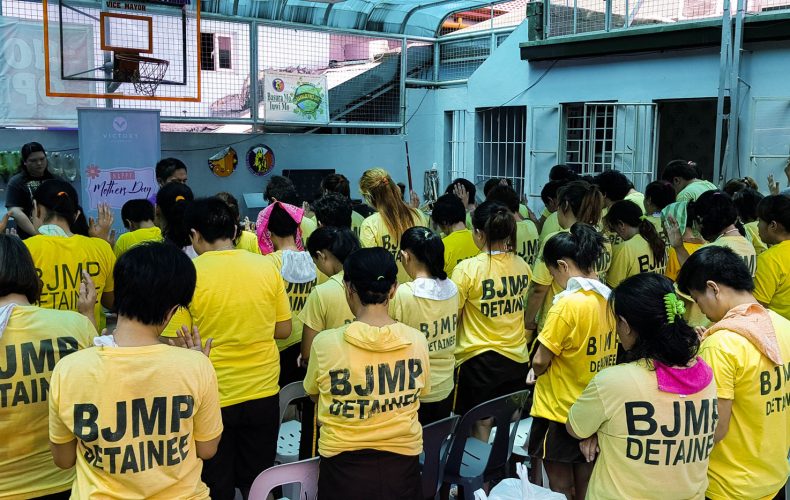 Mother’s Day at The Women’s Correctional

In April 2017, Victory group leader and Gallup-certified Strengthsfinder coach Val Baguios joined several other leaders from Victory Greenhills, led by Victory group leader Emie Victorio,  to visit the San Juan Women’s Correctional facility in San Juan City, Metro Manila. It may have been his second time at the women detainees’ facility, but the impact of the work he witnessed there affected him just as strongly as his first visit. His account of their visit, aptly timed for Mother’s Day, follows.

Last May 15, I joined several of our Victory group leaders, led by Tita Emie Victorio, to celebrate Mother’s Day with our detained sisters at the San Juan Women’s Correctional facility. After my initial Christmas visit with them as part of Victory Greenhills’ “Bless the City” campaign, this was my second time to join our leaders. “Blessed” would be an understatement to describe our experience with the women there.

I realise this may sound ironic, but every single time we visit, we cannot help but feel the overwhelming joy, thankfulness and hope of the detainees! To witness them sing worship is an experience in and of itself: when they worship, they sing with all their voices and emotions – a sign of unwavering faith in a God Who they know hears their praise.

For the past eight years, Tita Emie has ministered to the women at San Juan Women’s Correctional. She visits the detainees, shares the word of God with them, and prays for them. She has even gone so far as to help a few of them follow up their cases! Every Monday morning, more than 50 detainees join her at the Multi-Purpose Area to listen to to the Word of God shared and the gospel preached. No wonder these women have hope!

That Mother’s Day, shortly after arriving, I sat beside Tita Remy, a woman detained for two years on a drug charge.

“Dati (Before),” she said, “hindi ako sumasali sa mga Bible study na yan (I never joined those Bible study sessions).” When she was younger, Tita Remy had no respect for the Bible at all; she even considered using it to hide and smuggle drug paraphernalia. The day we visited, we saw her sitting in the front row, with a Bible, pen, and notebook in her hand, eagerly listening to Pastor Allan Magtoto preach about hope in Christ.

“Kapag tinatanong nga ako ni Tita Emie kung ano ang pinag-aralan namin last week (When Tita Emie asks me what we studied last week),” she laughed, “lagi ako nagtataas ng kamay at sumasagot (I always raise my hand and answer).” While initially hesitant to attend the Bible study sessions, Tita Remy eventually learned how to read and put her hope in the word of God. “Kahit mahirap (Even if it’s hard),” she added, “at wala ang pamilya ko dito, basta’t araw-araw kinakain ko ang salita ng Diyos masaya na ako (and my family isn’t with me, as long as I get to eat the Word of God daily, I’m happy).”

Hearing this, I was puzzled. How could an old woman detained in a correctional facility have this much hope and contentment? Her answer was precise that: she consumed the Word of God daily, even praying for her older sister who struggles with Parkinson’s disease. We prayed for her and she walked away with that hope-filled smile again.

After Tita Remy left, a woman approached us, smiling. I remembered Jocelyn, who was detained at the correctional facility for a little over eight months, because we prayed over by our group last Christmas; we had asked God to let her children visit her in the facility.

“Binisita nila ako!”, she gushed, “Binisita ako ng mga anak ko! (My children visited me!)” God answered our Christmas prayers, Jocelyn told us, when two of her daughters not only visited her, but spent two days with her, last month. We continued to pray that her husband would visit her as well, despite their strained relationship. After praying, we encouraged her to keep her faith strong, but it certainly felt like the reminder was more for myself than for her. She was already full of faith!

Upon spying another woman in the room, Francis, one of our church leaders, pulled me aside and suggested we talk to her. He remembered seeing her last December without a  Bible, but today, she was carrying a Bible, and he wanted to known what made her decide to have her own copy.

When we asked Jenny what brought her to bring a Bible to the Bible study session, she replied, “napanaginipan ko Siya. Sinabi Niya sa akin ang Lucas (I dreamed of Him. He told me to look up a verse in Luke).” She then proceeded to recite Luke 6:41 in flawless Tagalog.

Describing herself as a really troublesome inmate, Jenny said that shortly after the Christmas meeting, Jesus told her to stop looking at other people’s messes, and instead allow Him to fix her life. And that is what she did. Soon enough, Tita Emie gave her a Bible, which she began to read and used when she participated in the Bible study.

“Maraming ni-re-reveal si God sa akin (God is revealing a lot of things to me),” she said with conviction. Arrested seven years ago on drug charges, Jenny was convinced that Jesus allowed her to be detained here, and in doing so, saved her life. She was so heavily involved in drugs, she told us, that she might have died had she not been detained. What a perspective!, I thought to myself.

“Unti-unti na akong nagpapasakop sa Kanya (I am slowly allowing Him to take control of my life),” she said, referring to God’s lordship over her life. Fully convinced that Jesus is fighting for her, Jenny is optimistic that she will be out soon, that her family will forgive her, and that she would be a testimony that God is real. Even if people cannot see God, she mused, she knows He is real. The truth is, I believe that she is already a testimony that God is real, even in her current season. After being prayed over, Jenny asks me if she can keep my neon highlighter. I asked her why. She replies that she’d like to use it to highlight verses in her Bible. I gladly gave it to her.

That day, I joined Tita Emie, thinking that the lady detainees needed to understand what hope meant. I left, understanding what hoping in Christ really meant, thanks to the example of people who had plenty of reasons to lose hope, but did not, because they knew where their hopes lie. Thanks in great part to Tita Emie, whose weekly visits, engaging these women and really just loving them with the love of God, planted seeds that are now bearing fruit. I think this what Jesus wants you and me to do when He commissioned us to make disciples. Jesus wanted us to engage our community, and that includes our brothers and sisters who are behind bars.