Last November 24, 2022 at the Every Nation Building, we celebrated the lives of 47 men and women who just graduated from the Every Nation Leadership Institute’s School of Campus Ministry and School of Church Planting, and will begin a new season in vocational ministry.

Here are some highlights from the celebration.

The School of Campus Ministry aims to train and equip incoming campus missionaries for church-based campus ministry in pursuit of God’s call and mission for us as a church. They will then be sent out to different campuses to apply what they’ve learned in campus outreach, student discipleship, and leadership development.

The School of Church Planting trains and equips future church planters who will be going to strategic cities and locations across the nation, as well as vocational ministers in specialized ministry areas such as kids ministry, music ministry, pastoral services, and discipleship ministry.

Let’s be in faith for more campuses to be reached and churches planted in different cities and nations as we continue to take part in advancing God’s kingdom together.

Congratulations to all our graduates! 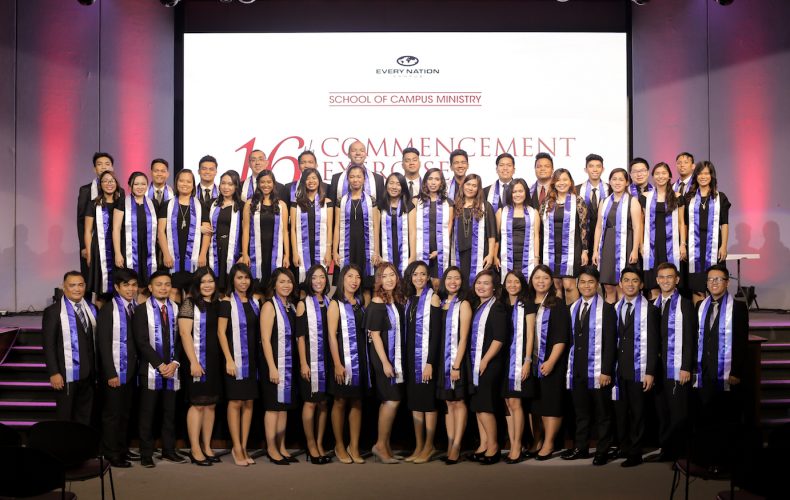 Last November 24, Thursday, our 16th batch of campus missionaries graduated from the Every Nation School of Campus Ministry. The 46 men and women who make up this batch were trained for three months, and are now entering their new season of full-time vocational ministry. 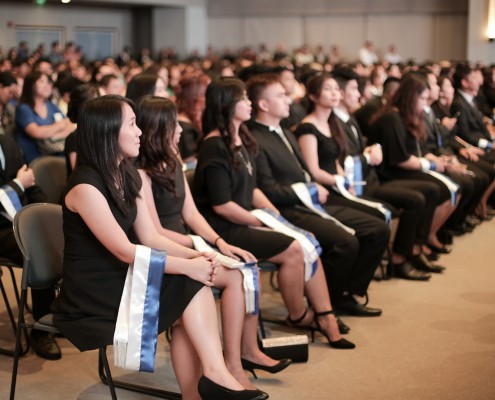 For the past eight years, the School of Campus Ministry has been training, equipping, and preparing men and women to be sent out, to advance God’s kingdom in the campuses. We are in faith that our new graduates will be living the vision of witnessing young people give their lives to Jesus, and help them make disciples.

Please pray for grace, strength, and fruitfulness for our new batch of campus missionaries! Let’s continue standing with them as they change the campus, and change the world.

School of Campus Ministry Gears Up For Graduation

The School of Campus Ministry is designed to train and equip incoming full-time campus missionaries for their first year of ministry. The program’s curriculum, which has a three-month duration, was built on the fundamental principles of campus ministry. It serves to instill these principles in our future campus ministers as they reach the campuses and disciple students.

This year, the fifteenth batch of campus ministers will be graduating from our Every Nation School of Ministry on Thursday, the 14th of April.

This batch, made up of 38 men and women, is comprised of 21 students from provincial churches, 6 from Metro Manila, and 11 international graduates from countries such as Japan, Thailand, Indonesia, China, Australia and Singapore. These future campus ministers will pioneer campus ministries in their areas. As they  go back to their respective mission fields, we are expectant that God will use them in different campuses to reach out to the next generation and be radical for Jesus. 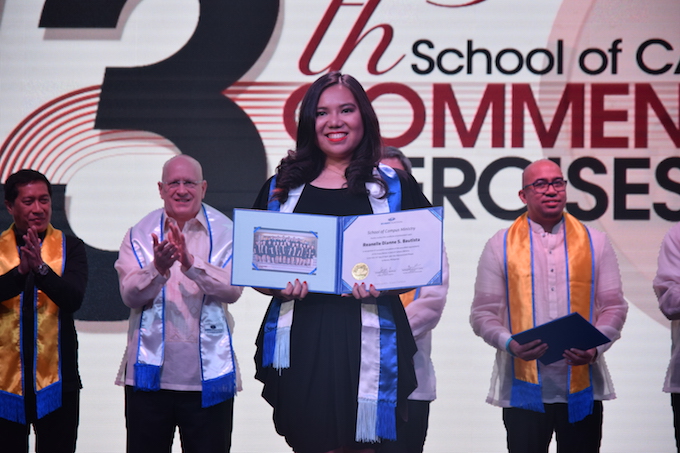 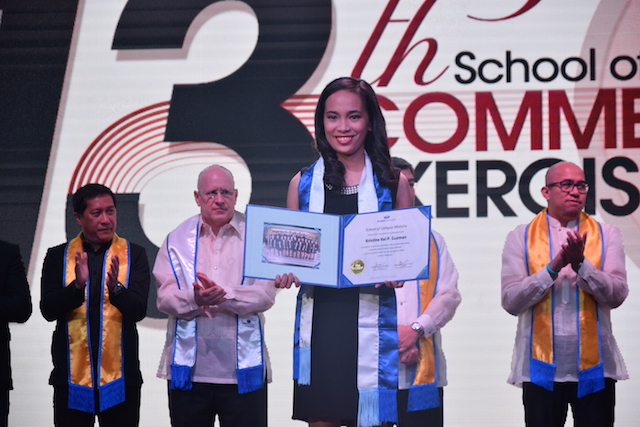 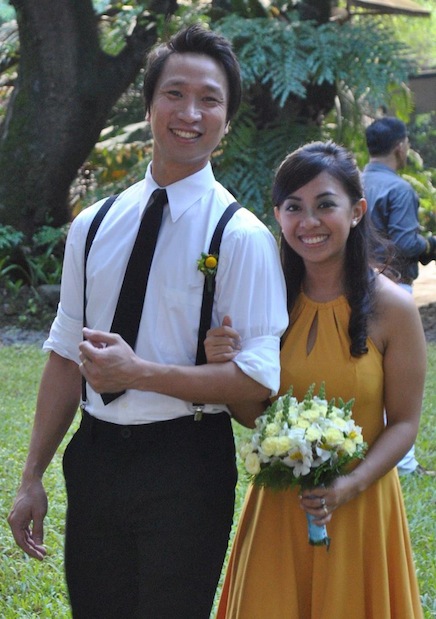 Sharing the Message of Hope

In the wake of typhoon Yolanda bringing destruction to the Leyte city of Tacloban, Kix Javier felt a strong urge to take part in helping the fallen city.

“Even before I went there,” he says, “something was tugging at my heart.”

Five days after the storm hit, he flew to Tacloban from Manila. He was a few weeks shy of graduating from the Every Nation School of Campus Ministry, where he was training to be a campus missionary under Victory Tacloban.

Kix collaborated with Victory churches spearheading relief and rehabilitation efforts in the area, even sleeping at the airport to properly receive the goods being sent to church members affected by the typhoon. He also assisted Tacloban’s city government, offering aid to government employees who lost homes, possessions, and even loved ones.

“During the first few days,” he says, “they were also victims.”

The whole time Kix was in Tacloban post-Yolanda, mobility and transportation posed a challenge in accounting for church members and distributing relief goods. “Some of the roads weren’t clear (because of debris),” he explains. While some of Victory Tacloban’s church members sought refuge in Pastor Eugene Ramirez’s home, Kix chose to travel by motorcycle to visit and account for members who couldn’t leave their homes. All in all, the Victory Tacloban team was able to account for sixty-six church members, including Nessa Gardiola, another incoming campus missionary.

Kix flew back to Manila to attend his graduation from the School of Campus Ministry on November 28. He was chosen to deliver a speech during the commencement exercises.

“Loving God and loving others became more real in my life,” he shared of his Tacloban experience in his speech. “Christianity is not confined in the four corners of the church, but in the places where the gospel is needed.”

What’s next for Kix, and Tacloban? Kix has a stronger resolve to share the gospel in the campuses in Tacloban. “There is an even greater storm coming,” he says, “and that is the storm of the gospel.” To date, forty colleges and universities have been destroyed by Yolanda’s wrath, but there is no stopping Kix from being used by God to preach a message of faith, hope, and restoration in brokenness. 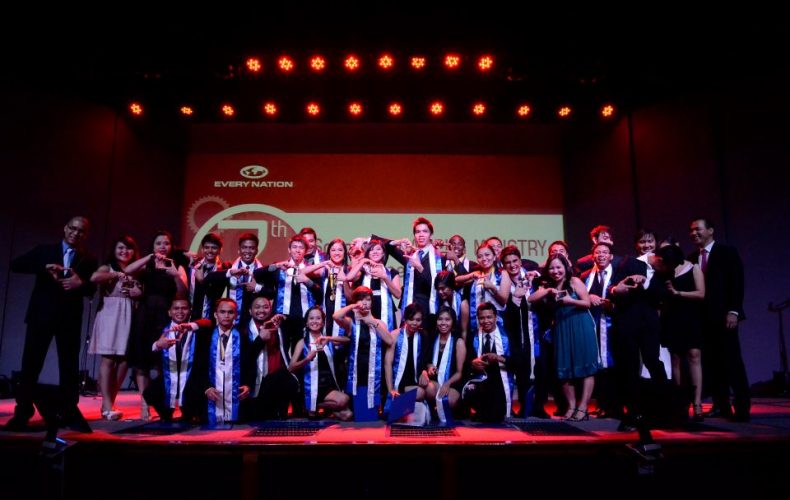 Change Agents for the Next Generation

Twenty-three campus missionaries were commissioned and sent back to their respective local Every Nation Campus centers last April 3, 2012 as the School of Campus Ministry held its seventh Commencement Ceremony. 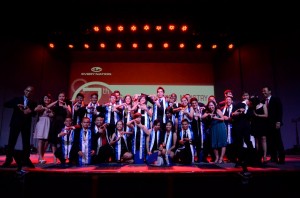 These students, composed of ten Metro Manila campus missionaries and thirteen provincial campus missionaries, have coined “The Catalyst” as their batch name. They chose this mainly because of the life changing impact that Jesus has done in their lives and how they have come to understand this even more, especially when they entered the three-month training.

“A catalyst is something or someone that causes an important event to happen,” Liane Silla, this batch’s Best Preacher Awardee, shared. “For us, Someone did. Jesus is our Catalyst. Just as a catalyst combines two things that are originally impossible to combine, Jesus did so too.”

By realizing that Jesus is their Catalyst, these men and women are now even more passionate in reaching the next generation. As Jesus caused change in them, it is also through Him that they can be agents of change in the lives of the young people of this nation!

Armed with a compelling truth and equipped with all the lessons they’ve acquired in the School of Campus Ministry, these new campus missionaries share our excitement in their returning to many different parts of the Philippines to win campuses for Jesus!

Front and Center in Reaching the Campuses

A new batch of campus missionaries were once again launched into the mission field last September 29, 2011 as the School of Campus Ministry held its sixth Commencement Exercises.

For the past three months, the Every Nation Building had become the training ground of the twenty-three individuals from all over the country who have come together to be equipped and empowered as the newest batch of campus missionaries.

Calling themselves the Frontliners, they are ready to stand front and center in reaching the campuses for Christ. In fact, the local churches of San Carlos, Legazpi, and Imus have sent their first ever campus missionaries to be formally trained in campus ministry. 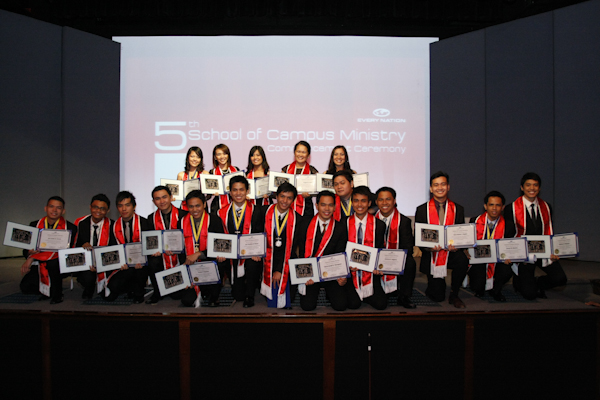 Ready for the Campuses: School of Campus Ministry Graduation

The fifth batch of campus ministers graduated from our Every Nation School of Ministry last April 12, 2011.

This batch, made up of nineteen men and women, is definitely a mixture of many firsts. Eleven of the graduates are from provincial churches and many of which will pioneer campus ministries in their areas. Two graduates are from other Christian churches. This batch is also considered as the youngest the school has ever had, having a nineteen year-old as the youngest in the class and a twenty-four year-old as the eldest.

According to Migz Tadique, one of the graduates who will serve in Victory Cabanatuan, he thought it was just about academics, but “We learned a lot of things (like perseverance), how to (respond) to tasks, how to relate with one another, (and) how to work together as a group.”

Beaming with great potential and with all lessons that they acquired in that three fruitful months of studying in School of Campus Ministry, these upcoming campus missionaries are now more than ready to go back to their respective mission fields to be used by God in different campuses to reach out to the next generation and be radical for Jesus.