“Lord, I did everything I knew to do to make my life remarkable, so I can give the glory to you,” states Pastor Greg Wark, alluding to what he would want to tell God face-to-face when he meets Him.

Pastor Greg, the founder of Force Ministries, a non-profit organization that uses mentoring relationships to help soldiers and their families grow as leaders, spoke to more than 2,800 men from different parts of Metro Manila, for the talk Boots on the Ground. The event discussed what it means to be a man in today’s age. It was held at different Victory locations last week. Pastor Greg’s ministry partner JT McCraw, founder of the BE MEN Movement, also spoke at the event.

“Manhood is defined when you are in combat,” Pastor Greg says, expounding on the truth that every man must be in a righteous fight. He notes that “a man without a righteous fight will degenerate.”

He emphasized that as followers of Christ and believers in the gospel and God’s Word, “we have a solution to every problem man can invent.”

“Go out there and do something,” he adds, telling the audience that if we are to put on the armor of God, it’s because you need to “go somewhere where you’re going to get hit.” “He wants you where evil is prevailing,” he continued, citing his experience in venturing to dangerous and conflict-ridden sites, with the ultimate goal of expressing God’s love and compassion to those in need.

“Jesus only took one thing on earth, His scars,” Pastor Greg explains, highlighting that every man is “born with a mission inside of our soul,” referencing how Jesus best exemplified this during His ministry here on earth.

“You’re either going to be weighed down with the weapons you need in your future, or weighed with the wounds of the past,” says Pastor Greg, reminding the attendees that they need to be healed from the wounds of the past before getting into the fight. After his part of the talk where he discussed the need for men to always be ready for the mission God has called them to, he invited Pastor JT to preach about the need for healing.

Pastor JT discussed the three wounds that every man needs to address: the father wound, mother wound, and friend wound. All these have an effect on how a man interacts with the world around him and sees himself. “When you have those wounds, you’ll accept passivity and reject responsibility,” he says.

Pastor JT also encouraged everyone to accept responsibility, lead courageously, and invest eternally. He then proceeded to lead the men in attendance in a time of prayer and ministry, reminding everyone that “those wounds inflicted on you (are) not your fault.”

“Don’t take your wounds into battle,” he notes, sharing that a relationship with the Father, commitment and focus to our mission as men, and strong friendships with other godly men, are necessary for these wounds to heal.

After Pastor JT spoke, Pastor Greg came up the stage to close the meeting. He asked the men to do a prophetic act, encouraging them to clench their fist, as if holding onto something. It would symbolize the issues and the pains they have been holding on. “I want you to cast it on the ground and step on it,” says Pastor Greg. The minister counted to three and altogether, a chorus of feet stomping could be heard across the auditorium, not unlike the inspiring cadence of boots on the ground, marching on to fulfill their mission. 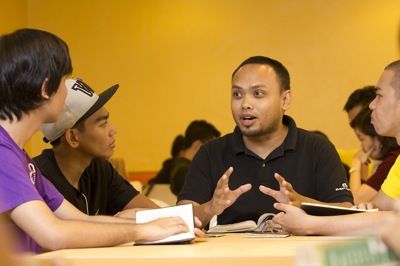 Living up to God’s Design

Isn’t it empowering to know that God has an intended design for how we are to live? Blueprint, our recently concluded series, laid out God’s design for biblical manhood and gave all of us a guide on how we can live our lives to the full!

On our Facebook page, we asked people to share the most important lesson they learned from Blueprint. Here are some of their insights:

“God has a specific design for me. When I don’t trust God’s design and I rely on my own ways, I fall into pride. But when I trust His design, I become more . . .  blessed.”

“God did not design us to fail. He is perfect and He created us in His own image. All we need to do is open our eyes and see how perfect His will is for each and every one of us.”

“God created me in His likeness. His imprint is in me. I should seek His plan for me.”

“I work to glorify God, not men. I serve Him in all of my ways.”

“Leadership is about authority, direction and accountability.”

“I need to take care of my family and my presence is very important in order to raise a godly family. As an OFW, I’m praying that God will lead me to a work where I could be with my family. I believe in miracles!”

“Wonderful message about the role of husbands. As head of the family, they should be the spiritual leaders, not the wives, though the wives (with the right attitude) should perform their duties as helpmates to their husbands. Wives need to pray more for their husbands.”

How about you, what was the most important lesson you learned from Blueprint? Let’s put God’s Word to practice and live up to God’s biblical design every day!

Just as a structural blueprint gives rise to a majestic structure, God has crafted a blueprint which gives us an idea of how we could live our lives to the full. Knowing what His blueprint holds aids us in developing a changed mindset and a positive impact to our relationships, our community, and our nation.

What’s more, God’s blueprint touches on essential topics such as biblical manhood, the ownership of it, and the responsibility and authority that comes with it.

Join us in the next couple of weeks and discover what this Blueprint says specifically about God’s intended design for biblical manhood!

We will be hearing about the following topics:

Week One: In God’s Image
Week Two: In the Garden
Week Three: In the Lead

Victory holds weekly services in fifteen locations across Metro Manila and sixty locations in the provinces. Drop by our national directory to find out where the local Victory church nearest you is.

Spread the word to your friends and family, and we hope to see you all at our services!