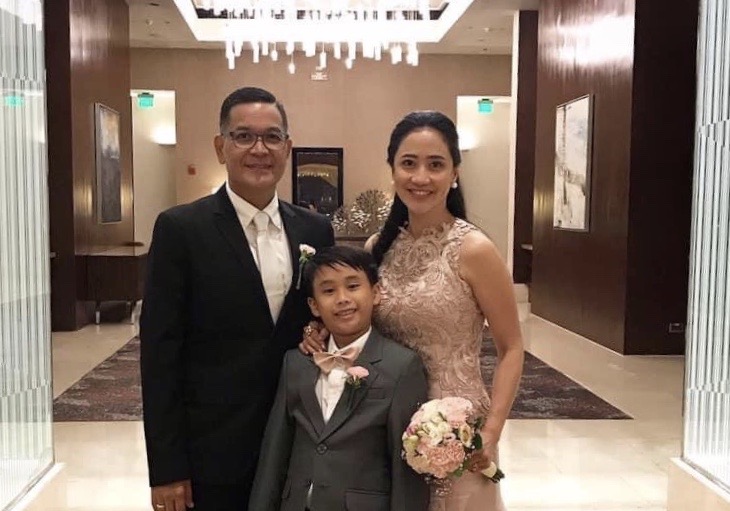 We are never alone. God is with us as we face all our trials, and He will give us all that we need to endure. Here is a story of a woman who declared God’s power and faithfulness as she continues to battle with cancer.

In December 2019, two days before Christmas, I had a stroke. By God’s sovereign hand, it was accidentally discovered that my stroke was caused by a malignant tumor that was growing in my ovary. There was no other option but to go through a very complicated and dangerous surgical procedure.

The doctors seemed afraid to do it. They explained all the possible scenarios and made me sign a waiver. Days leading to the surgery, they kept asking me if I was ready. I just kept saying what I know to be true—God is with me. That gave me the boldness to also reassure them that God would be with them as they performed the operation. On January 14, less than a month after my stroke, I went under the knife. Because the tumor was deeply embedded in my body and the doctors were trying to make sure I would not lose any internal organ, my supposedly five-hour operation lasted thirteen hours. The tumor ruptured, and a procedure, which would require another operation by August, had to be performed. The whole thing was nerve-wracking—not only for the doctors and everyone in the operating room, but also for my loved ones who were waiting outside and praying for a miracle. God answered our prayers, and the operation was a success. But with it came the confirmation that I had stage 3 ovarian cancer. I had to go through chemotherapy.

Two days after the operation, my cardiologist suddenly thought of checking if I had blood clots in the lower part of my body. And although no one was explaining what was happening, I knew that he had seen something serious as doctors and nurses started running in and out of my room. To make the long story short, I had to endure a very painful procedure to stop large blood clots from moving up in my body and causing either another stroke or a heart attack. Because I had to be awake and I could only take a certain dosage of anesthesia due to my recent surgery, I was under a tremendous amount of pain. I was screaming my prayers and declaring God’s power over my body the whole time. Even if the procedure was extremely painful and physically draining, I knew that God was at work. He was the one who guided my doctors to check for the blood clots, and He gave me the physical and emotional strength I needed to go through that moment.

In February, just weeks after this ordeal, I started chemotherapy, which lasted for five months. While going through all this, I couldn’t help but think about my only son, Nathan, who is ten years old. Like any other parent, the thought of leaving him at a very young age broke my heart. I cried before God and asked Him to extend my life so that I can see Nathan grow up and fulfill his purpose in Him. While I was praying, pictures of books flashed in my mind. Nathan loves to read. What I saw were not the books in his collection, but college books. I took that as a promise, an assurance from God that He had heard my prayers and that He would heal me. Then I read a passage about Hezekiah in 2 Kings 20:5: “I have heard your prayer; I have seen your tears. Behold, I will heal you.” I’ve held on to those words ever since. The truth that God knows what I’m going through and that He is with me gave me so much peace and drove away all my fears. 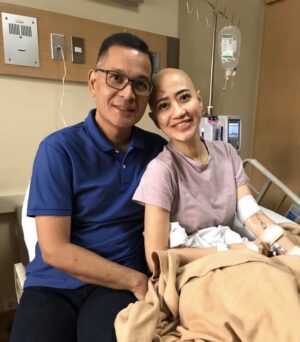 That was why when I felt extreme pain in my stomach sometime in July and doctors said that my symptoms and CT scan showed there was another tumor, I was certain it wasn’t a tumor. I kept reminding myself that God had given me a promise. He had already healed me. I had to undergo another surgery, but the doctors were also recommending chemotherapy, which would start as soon as a tumor was seen during the operation. God’s peace guided me to make the right decision. Fully convinced that I wouldn’t need it, I said no. While I lay unconscious on the operating bed, the doctors, in their amazement, kept telling me that God had answered my prayers. They couldn’t wait for me to wake up to tell me the good news: there was no tumor! They just had to untangle some adhesions that had formed in my intestines.

At a time when it seemed wise to avoid hospitals, I had to return at least once a month. After a stroke, two surgeries, and five months of chemotherapy, it seems surreal that right now, I’m in the comfort of my home and enjoying quality time with my husband and son.

People in the hospital called me a fighter. They were so amazed at how I held on to my faith, how I declared God’s goodness and power, and how I remained in high spirits while I was going through everything. They wondered how I could be so sure that God had healed me, but I really cannot take credit for any of that. It was God’s amazing grace that sustained me and enabled me to fight. He gave me the strength, courage, and wisdom I needed to go through this difficult time. I can fight because I know I’m not alone; God is with me. With God by my side, I am assured of victory. I can declare His healing over my body because He promised it, and He is always faithful to fulfill His promises.

In difficult and seemingly hopeless situations, we should run to God all the more. His grace is more than enough to sustain us. He will carry us through.

. . . fear not, for I am with you; be not dismayed, for I am your God;
I will strengthen you, I will help you, I will uphold you with my righteous right hand.

Hazel and her husband are active Victory group leaders in Victory Katipunan. Her final operation, which was originally scheduled in August, was moved to November to give her body time to recover from everything that has happened. They are in faith that it will be her last operation and that she will be declared cancer free. 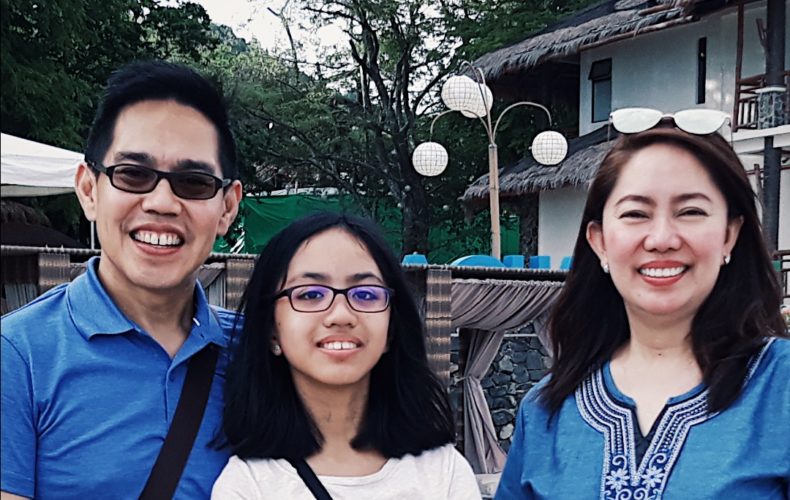 Paolo and Gladys know that God’s faithfulness does not and will not stop in their marriage. When Gladys finally conceived after almost 10 years of waiting, she and Paolo held on to God and believed that He would remain faithful despite the impossibilities they faced. Know more about God and His faithfulness through their story.

Paolo and Gladys were already followers of Christ even before they met. They had known each other since college and became part of the same barkada. In 1996, both of them faced major crossroads in their lives that—unknown to them—would make their paths meet.

While Gladys was praying to God for clarity and direction about her desire to pursue missions, God promised her that He would not send her alone—she would go to the nations with her future family. Thinking it was unlikely to happen at that time because she was not in a relationship, Gladys sought God in prayer and believed that if and when it happened, she would be with a man who also had a heart for missions.

Meanwhile, Paolo—who had heard a challenge to go to missions in a retreat that year—was contemplating a career change. Like Gladys, he had a heart for the nations and was seriously considering going to the mission field. When asked to take work responsibilities in Southeast Asia, Paolo did not think twice and immediately accepted the role. He knew it would open doors for him to do missions.

After months of not seeing each other, Paolo and Gladys were reconnected and learned about their respective plans of going to the nations. For them, it was like hearing a revelation from God—an answer to a long-ago prayer. It turned out that Gladys was not the only one who was believing God for a partner in the mission field; Paolo was, too.

Allowing God to let His plans unfold in His time, Paolo and Gladys parted ways to do what God had called them to do first. Gladys left for Thailand to accompany a friend on a short-term mission trip, while Paolo traveled to different countries as part of his job. After they had returned, Paolo pursued Gladys and eventually won her heart. A few months into their relationship, they sought God in prayer to know His mission for them as a couple. And when it became clear, they exchanged vows in February of the following year.

Seeing how God had carefully crafted their love story, Paolo and Gladys were certain that no matter what difficulties they faced, God would lead the way and see them through. Believing for a child was one of them. Every year, amid different trials, they would patiently wait for God’s promise to be fulfilled. And year after year, their faith was tested.

Until it finally came.

After almost 10 years of waiting, Gladys became pregnant. It was her first pregnancy at 40, and it was highly sensitive. While carrying their unborn child, Gladys battled with hyperthyroidism, hypertension, and seven myomas. She was bedridden for six months—and it took a toll on their baby. As a complication of hypertension, their unborn child was diagnosed with intrauterine growth restriction (IUGR), a condition in which an unborn child is smaller than it should be. Because the baby was not growing at a normal rate inside the womb, the doctors told Gladys that it was at risk of certain health problems, and it might stop growing at some point.

Instead of losing faith, Paolo and Gladys sought God even more and devoted time to pray for their baby. Though there were many times that they had both cried in pain because of everything, they still repeatedly went back to God in prayer and surrendered everything to Him.

On August 23, 2007, Gladys finally gave birth to a healthy baby girl named Sofia Therese or Pia. She had a Cesarean delivery at 36 weeks and six days. It was a full-term pregnancy! It was also a painless delivery all throughout.

Paolo and Gladys’ family is a testimony of God’s faithfulness. He has been faithful to them for more than two decades; they know that He will remain faithful in the years to come. He will continue to be the author of their life stories as they await their next mission as a family.

Paolo, Gladys, and Sophia are part of Victory Fort. Paolo has a small consulting business, while Gladys runs a school in Caloocan.