In December 2012, we officially launched one of our newest Victory church plants: Victory Meycauayan!

Located in the heart of Meycauayan, Bulacan, Victory Meycauyan first started as a church plant spearheaded by nearby Victory Malolos. Currently, around forty Victory groups meet in different establishments and locations within the city. Empowered leaders have also started Victory groups inside their own offices! But discipleship doesn’t just happen in these ways. Dennis Aquino, one of their pastors, excitedly shares about what God is doing in their city: “In December, we were able to connect with students from different campuses in Meycauayan for their annual Student-Leader meet. It is an annual summit where these students have the privilege to act as mayor, vice-mayor, and councilors for a week. This gave them a first-hand experience in learning how to lead our municipality.” We believe that this would pave the way to disciple the future leaders not just of this municipality, but even the region! Other than this, Pastor Dennis also recounts another interesting opportunity they had in engaging the local government. “We touched base with the local Sangguniang Kabataan leader, and we conducted a leadership training with the rest of the organization.” They’ve also been given the opportunity to share the gospel with employees of the Meycauayan City Hall, and hold Victory groups inside the building. 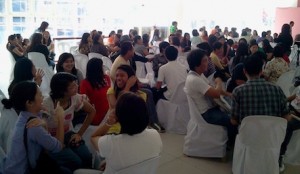 We are excited to know more about what God will do in the city of Meycauayan! Please pray with us for more disciples and leaders to grow in this community. Victory Meycauayan has services every Sunday at 10 AM. They meet at the 2nd floor of Supima Square along Malhacan Road, Meycauayan City. You may also like their Facebook page for updates. Victory Meycauayan is just one of the Victory local churches in Bulacan, and in the Philippines. We are also one church in Metro Manila meeting in fifteen different locations. Join us at the Victory center nearest you!