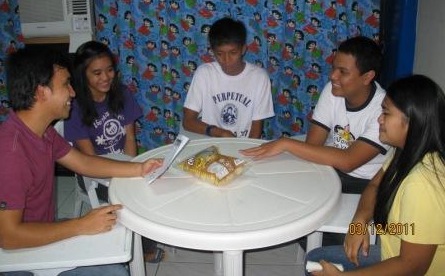 Victory Tagum and the Siopao

Who would have thought that siopao can be instrumental in the saving of many lives?

Pastor Manny Mintal (center) during one of the siopao outreaches

Ask Pastor Manny Mintal, the senior pastor of our Victory Tagum church plant. Through the power of God and His Word—plus Pastor Manny’s delicious home-cooked siopao—the team of church planters were able to connect with several students in Tagum, Davao, and eventually led them to having a relationship with God.

What started as an outreach project in July 2010 gave birth to a fruitful church plant right in the capital province of Davao del Norte. From outreach activities in nearby parks and “siopao outreaches” in the campuses, the growing church began to meet over merienda in carinderias until they eventually settled in their current Victory center.

Some of the students Victory Tagum has reached out to

On October 2011, Victory Tagum experienced a milestone, with their formal launch happening at the Town Country Plaza in Sobrecarey Street, Tagum, Davao.

Currently, several Victory groups are meeting in various venues in Tagum. More and more are going through ONE 2 ONE, while several others have already gone through Victory Weekend. Among the campuses in their vicinity, Victory Tagum is focusing its efforts on the University of Mindanao and the Magugpo Pilot Imelda Elementary School.

Indeed, greater things are up ahead for Victory Tagum! Join us as we pray for the campuses within their area and for more open doors to share the Word of God. Let’s also cover Victory Tagum in prayer, for growth and maturity of the church and of the current Victory groups.

Victory Tagum is one among a group of Victory churches in the Philippines. It holds a weekly Sunday service at 10AM at the Town Country Plaza, Sobrecarey corner Pioneer Street. If you know anyone in the area, don’t forget to let them know about our newest church in Tagum!