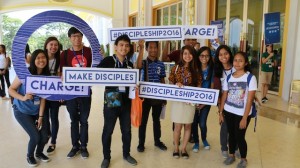 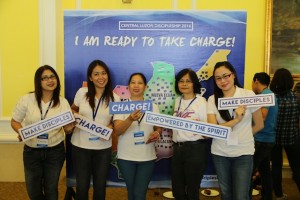 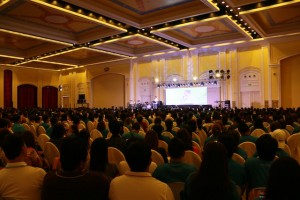 Passing on the Baton

Our Central Luzon churches held their first Discipleship Convergence in April 13. Over 750 discipleship group leaders from Bataan, Bulacan, Cabanatuan, Pampanga, Tarlac, and Zambales gathered in Clark, Pampanga, for an event that equipped, empowered, and encouraged them to continue honoring God and making disciples.

Pastor Steve Murrell shared a message about passing the baton of the gospel, reminding the leaders to act as “funnels” and invite people and lead them through the discipleship process.

Amy Dabu, one of the Victory group leaders from Victory City of San Fernando, cites Pastor Steve’s message as one of her personal takeaways. “(As a leader,) I learned that I have to pass on what I received.”

Amy considered herself “reluctant” when it came to sharing about what Jesus did for her. “I did not want to go to another level of my faith. I was content where I was,” she admits. Little by little, she was reminded of Jesus’s commission to go and make disciples. “Leadership is not about the titles or the perks I receive, but leading them to Christ.” Now, she is ready to go and make disciples in her hometown, armed with a big vision and putting her trust and confidence in God!

Amy’s story is just one of the many others we’ve heard from the conference. As our leaders go back to their workplaces, campuses, and families, we are excited to hear more stories of engaging, establishing, equipping, and empowering others for Jesus!

You can join any one of our eleven Victory churches in the Central Luzon region. If you have family and friends who live there, invite them to a Victory church within the area!

Victory is one church that meets in different locations in Metro Manila, and in other locations across the provinces. For more information on our locations and services, please visit our national directory. See you at our services!

Special thanks to Bing Tajon for our photos!